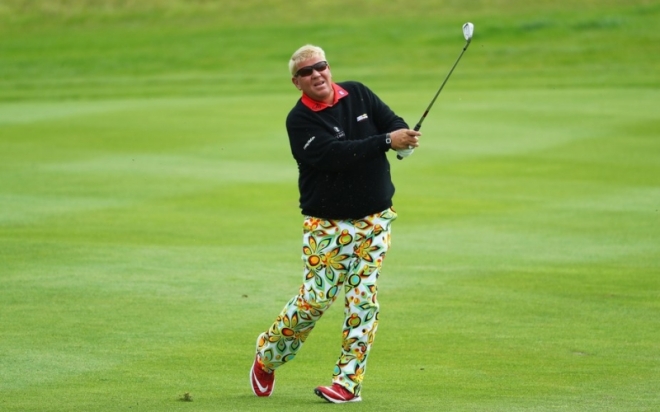 I would like to say that his natural skill and awareness of his own body movements is one of the most natural displays of golf that will ever be. HOWEVER….there are some things there that you can learn from!!!

You all know that I have been on a mission to get my swing figured out and gain some distance but not sacrifice any accuracy. I went to the range at the end of last week with just my hybrid, figuring that it wouldn’t be bad to get back into the swing of things (not sure if pun was intentional or not) with a longer club that wasn’t driver. (Driver and I are still getting used to each other. I’ve made a change that should make things a little better, but we’ll see what I get it out on the course) The hybrid seemed like the logical choice, especially since one of the two I have has been cut down about a half inch, making it a little more easy to work with.

That hybrid is 20* of loft, X-Stiff shaft (which I probably don’t need) and a half inch shorter than standard. The first shot I stuck with my old way of swinging, which is MCS style but short like Charley Hoffman. I recalled my thoughts on Sam Snead and having to work on my tempo and timing, leading me to think “Why not try to swing it like ole JD and see what happens?” Seemed like an innocuous thought at the time. I set myself up, waggled a few times, then drew back, letting my arms go a little longer than usual over head. I dropped in, and BANG…that ball sailed farther than it had it quite a while. Without giving it more than probably 70% I watched that ball drop out of the sky around 215 yards out and then roll out even further.

For the next couple of shots, I kept the power around 75%, just getting used to letting the club get that far over my head and feeling loose in my arms before kicking my weight down and through. By the time I reached the halfway point in the bucket, I was ready to try some serious power. I set one up, waggled, drew back…BANNNNGGGG!! That ball ended up sailing about 245 yards before finally coming down. The Pro that was giving a lesson at the end of the range said “Well Damn…” while the kids he was teaching stopped swinging and watched. Now, I didn’t go to the range to showoff, but I have to say that really greased the wheels of my ego, which got my feeling way more comfortable with this new loose JD style swing.

I have to say….while most coaches and teachers would venture away for JD’s swing, it is definitely working for me. I have always had issues being a little quick because it feels more powerful. This is really starting to work for me to keep that tempo in check. I love JD and I love Fred Couples. They always look as though they aren’t really trying and that’s because they have the sequence down and their hands whip through with enough power to handle putting that ball into orbit.

This week is great weather, so I plan on hitting the range at least once, hopefully squeezing in a round this weekend since I have a 5 day weekend starting Friday night. I will get some video up soon!